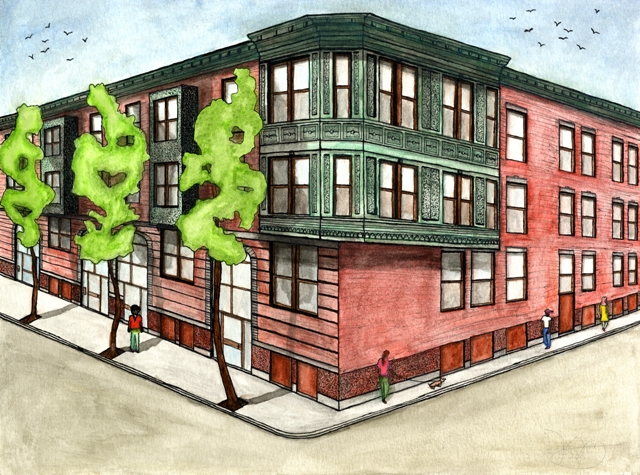 Commonwealth Land Trust owns and manages over 100 units of family housing in Lower Roxbury and Chelsea, serving formerly homeless and low- to moderate-income families. Although 34% of CLT’s family housing residents are formerly homeless, their needs are very different from our supportive housing clients. Family housing residents do not receive case management services, but benefit from a responsive supportive housing manager and maintenance team. Click on the links to learn more about CLT’s Lower Roxbury Apartments and Chelsea Apartments.

CLT hosts events for family housing residents, such as garden clean ups, concerts, and a holiday toy drive. Residents of CLT’s Lower Roxbury Apartments take an active role in shaping their housing through a Residents’ Association that meets quarterly to discuss building and community issues.

Many families have lived in CLT housing for decades, including Richard Brown, Althea Niles, and Sara Rosa.  Click on the links below to learn about their lives and experiences at CLT.

Families with children are the fastest growing category of homeless people in the US.[i] 1.5 million children under age eighteen experience homelessness every year, spending their nights in emergency shelters, abandoned buildings, cars, and the streets.[ii] Families experiencing homelessness have increased from nearly nothing in the 1960s to accounting for over 40% of the homeless population in the 2000s.[iii]

Homelessness has a profoundly negative effect on the long-term well being of children. Children experiencing homelessness are more likely to suffer from poor health, demonstrating high rates of emergency room visits and delays in obtaining preventative care. In addition, they display increased rates of emotional, developmental, and behavioral problems.[v]

Many homeless children are in a state of constant transit, cycling through emergency shelters and overcrowded temporary living situations. Such mobility is highly detrimental to homeless children’s academic development. Researchers estimate that each change in schools results in a student becoming four to six months behind in their coursework. Mobility interferes with the stability of relationships and undermines students’ self-esteem and self-efficiency. Homeless students are two times more likely to have a learning disability and three times more likely to have behavioral problems than non-homeless students. A particularly sobering statistic is the fact that less than 1/4 of homeless students will graduate from high school.[vi]

The number of homeless families in Boston remained relatively unchanged from 1994 until 2005 when it began to show significant increases. This trend continued through 2008 when homeless families outnumbered homeless individuals for the first time. A record 3,870 people in families, predominantly single mothers and their children, were homeless. In 2009, there were 2,380 homeless children in Boston, a figure that has doubled since 2005.[vii]

Economic problems have fueled this trend, including rising unemployment, a loss of 19,000 jobs since 2008, and 4,000 foreclosures since 2007.[viii] These statistics underscore the need for more affordable housing in Boston, which would enable low-income families to remain in housing during adverse economic conditions.

CLT’s family housing in Lower Roxbury and Chelsea is an important affordable housing resource, providing formerly homeless and low- to moderate-income families with a permanent home and stability.

[i] Joseph Murphy, “Homeless Children and Youth at Risk: The Educational Impact of Displacement,” Journal of Education for Students Placed at Risk 16 (2011): 42.

[ii]  “Current Statistics on the Prevalence and Characteristics of  People Experiencing Homelessness in the United States,” Substance Abuse and Mental Health Services Administration, accessed May 16, 2013, http://homeless.samhsa.gov/ResourceFiles/hrc_factsheet.pdf.

[iii] Murphy, “Homeless Children and Youth at Risk: The Educational Impact of Displacement,” 42.

[vi] Murphy, “Homeless Children and Youth at Risk: The Educational Impact of Displacement,” 42-51.