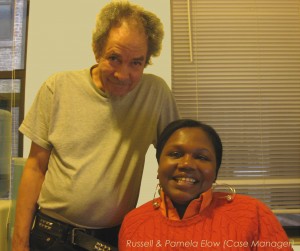 “I’ve had a hell of a life,” says Russell, a resident of Bowdoin Manor since 2007. “People don’t understand the things I’ve gone through. I lost a daughter and son in the last year-– one from cancer and one to the streets. Sometimes I just go in my room and I sit down and cry.”

Russell is a 68-year-old Vietnam War veteran who was homeless for over 20 years before coming to Commonwealth Land Trust. He grew up in the South Carolina foster care system and was a victim of abuse and domestic violence. As a young man, he served in the Special Forces branch of the Marine Corps and returned home battling post-traumatic stress disorder and alcoholism. He married three times and raised ten children in Boston. Russell attributes his regression to street life to his struggle with alcoholism. During his time on the streets, Russell slept in abandoned buildings and cycled through the emergency shelter system. In 2006, he was violently attacked and sustained a life-threatening brain injury that has left him with crippling headaches and blindness in one eye. Russell was referred to Commonwealth Land Trust while recovering in a rehabilitation center.

At Bowdoin Manor, Russell gained a stable permanent residence and network of support. Upon move-in, CLT staff helped Russell adjust to permanent housing, connected him to local resources, and established a weekly meeting schedule to address his alcoholism. “Without Commonwealth Land Trust I’d probably still be in a shelter,” says Russell. “I love my room and all of the staff. No one’s got a problem with me. I’m living like a king.” Russell’s Case Manager, Pamela Elow, describes his progress saying: “Russell has experienced a tremendous amount of loss and he utilizes a lot of resources to work through pain and grief. Sobriety is still a challenge and we’ve helped him identify ways to avoid relapse. If Russell wasn’t at Bowdoin Manor, he would face considerable difficulties maintaining his health. The fact that our office is located in his home has given him the opportunity to trust. We’re always there for him.”

Today, Russell is an active member of the community. He volunteers at a local food bank five days per week and is connected to his family. Throughout 2011, Russell took care of his neighbor who was dying of cancer and struggling with addiction. He bought her medication, cooked, and cared for her during the last year of her life. Channeling loss and adversity into compassion, Russell serves as a model for other residents. Russell says of his outlook: “I’m happy here. I have my sad moments, but I’m not going to let the sadness take me away from being happy.”