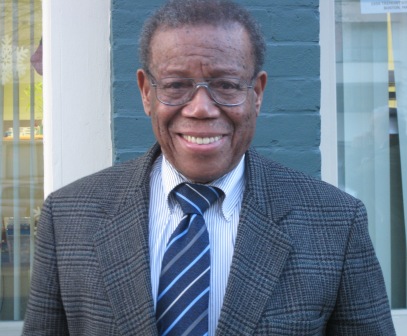 “I’ve been living in my home at 1059 Tremont Street since 1933,” says Richard Brown, an 86-year-old educator and activist. He has served on CLT’s Board of Directors and chaired the Lower Roxbury Residents’ Association since CLT assumed management of the property in 1994.

Mr. Brown grew up in a working class neighborhood composed of Irish, Italian, and African Americans. He remembers a time when streetcars ran along cobblestone roads lined with mom and pop stores selling candy, soda, and other sundry items. “Doors were open,” says Mr. Brown. “People were gracious and there was a sense of community and connectedness. As a child, I knew I couldn’t get into trouble without my parents finding out through the local networks. Neighbors looked out for one another.” He was the second oldest of four children whose parents instilled in them the importance of education and civic engagement. Indeed, all of his siblings went on to become educators and active citizens.

At age 18, Mr. Brown left Lower Roxbury and enlisted in the army, serving in World War II and Korea. Using the GI Bill, he attended Boston University and earned a bachelor’s and master’s degree in mathematics. “I decided to study math because it’s a difficult subject and I always try to challenge myself,” says Mr. Brown. “And teaching suited me well because I’m a ham.” He used his warm appeal to instruct students at the elementary through college level at several institutions, including Tuskegee University and Boston Latin Academy, and chaired the math departments of Wayland Junior High School and John D. O’Bryant School. During the tumultuous years of forced busing and the desegregation of Boston’s public schools, he served as the Director of Minority Recruitment for the Boston Public School system. He tutored and mentored countless students, many of whom went on to become teachers, and he has been granted numerous awards for his community involvement.

Adding to his many achievements, Mr. Brown continues to work with CLT staff to preserve affordable housing and a sense of community in Lower Roxbury. “I’ve been working with CLT staff for over 20 years,” says Mr. Brown. “They make sure the housing is well maintained and the residents are always their top priority.” Although Lower Roxbury is beset by the problems plaguing much of urban America, including increased poverty and crime, CLT’s small locally managed buildings foster a sense of community reminiscent of earlier eras. “A lot has changed,” says Mr. Brown, “but CLT’s apartments are still a great place to live.”