Every Wednesday, Commonwealth Land Trust (CLT) hosts a recovery group at Bowdoin Manor, our largest supportive housing program in Beacon Hill.  The following write-up was created by Nate Williams, a Tufts University junior and development and communications intern at CLT. 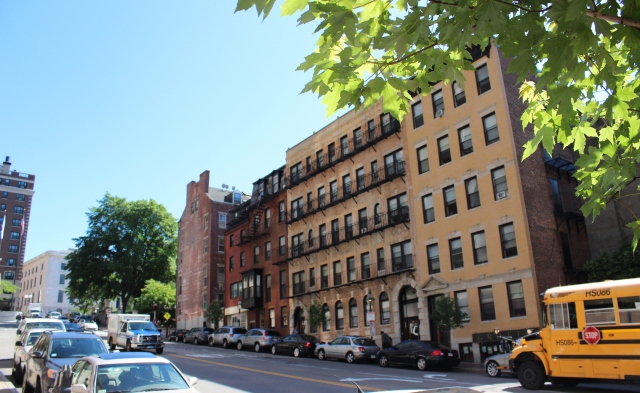 To a casual observer the meeting would appear as a mere gathering of friends- jokes begin to fly as residents settle into a circle of lawn chairs and raucous laughter encourages others to come outside into the sun. Yet as Patrick Haynes, the Bowdoin Manor case manager, steps onto the porch, the residents immediately settle down. “I just want to remind you guys that anything said during this session is confidential,” he states, prompting earnest nods of agreement from the entire group. With those words, another session of ‘Here and Now’ has begun.

Since May, Patrick and case management intern, Jeanne, have worked to create a recovery group tailor-made for residents of Bowdoin Manor who are currently or have previously struggled with substance abuse. As its name suggests, ‘Here and Now’ bases its mission on the following questions: “If not here, where? And if not now, when?” With that mantra in mind, the Bowdoin staff members take a pragmatic approach to running the group. “We won’t kick somebody out for making mistakes, as that tends to bring about fear or lying,” Jeanne explains. “We will always try and work with someone as long as they are interested in helping themselves.”

Yet Patrick and Jeanne claim that their support is only a small part of what makes ‘Here and Now’ so effective- in fact, it is the residents themselves who step forward to help each other during the difficult times. “The level of camaraderie has grown,” Jeanne says. “And [the residents] are all very willing and committed to being in the group.” In this way, ‘Here and Now’ has distinguished itself from many similar groups, as members choose to participate on their own accord. Jeanne continues: “The main difference between our group at Bowdoin and many others is the positive attitude that our members bring to each meeting.”

It is this positive attitude that has led many of the participants of ‘Here and Now’ to reach out to their friends in the building and encourage them to take part in the weekly support group. The circle of plastic chairs continues to expand each Wednesday, prompting one resident to inadvertently sum up the effectiveness of ‘Here and Now’ with a simple observation: “We are going to need a bigger porch.”