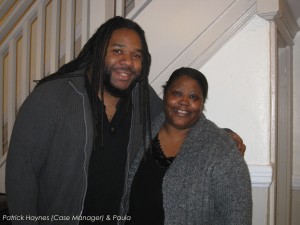 “Being in a shelter is something that you have to get used to,” says Paula, a 47-year-old resident of Commonwealth Land Trust. “You have to maintain your composure, take in a lot of things, and just hold up.”

In 2009, Paula became homeless following the economic downturn. She was living in a market-rate apartment with her daughter, scraping by on social security and her daughter’s job at the YMCA. After her daughter’s hours were reduced, they were unable to pay their bills. Paula and her daughter were forced to vacate their apartment and enter the emergency shelter system. “Every shelter has a different set of rules,” says Paula. “There’s ones where you can stay for ninety days and others that only let you stay for seven days. You have to be out around 7AM and you can’t come back till 4PM. It doesn’t matter if it’s raining or snowing, you have to leave and go somewhere else. I’m a diabetic and my blood sugar would get real low. Being in shelters made it difficult to stay healthy.” An acquaintance informed Paula of an apartment building in Beacon Hill serving disabled individuals. Paula arrived at Bowdoin Manor and was surprised to learn that it is a single room occupancy (SRO) building. “I was hoping to get an apartment, but when I saw the rooms I was like ‘Can I move in today?’ I was accepted 6 months later. I was happy.”

At Commonwealth Land Trust, Paula benefits from a stable permanent residence and the presence of on-site case management staff. “The Case Managers help you with anything that you need,” says Paula. “You couldn’t ask for better people. I like my neighbors too. It’s quiet and safe.” Paula struggled with severe depression and anxiety, but now maintains a positive outlook. “It’s hard not to smile when Paula is around,” says Patrick Haynes, Paula’s Case Manager. “If you just met Paula, you wouldn’t know what she’s been through. She is very resilient and caring.” Paula will soon receive a section 8 mobile voucher, which she will use to secure an apartment in the Boston area. Commonwealth Land Trusts helps residents who are thriving to transition to independent housing.

Paula is looking forward to securing an apartment and finding a volunteer position helping homeless women. She is successfully managing her health and spends her days caring for her elderly grandmother. Paula reflects on her time at Commonwealth Land Trust, saying:  “SROs are great. Sometimes people say ‘Oh, you’re just in a room.’ But it’s my home. I can come and go as I please. I put my curtains up. I’ll still visit the staff after I get an apartment because they’ve been very good to me. It’s a great place.”